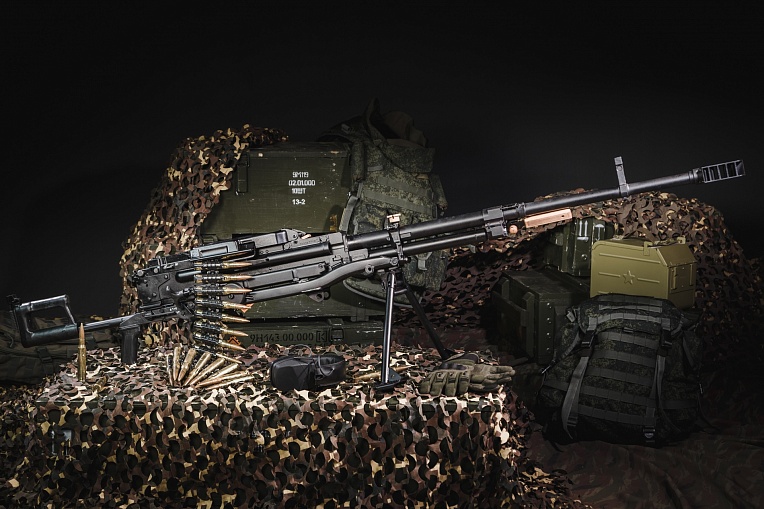 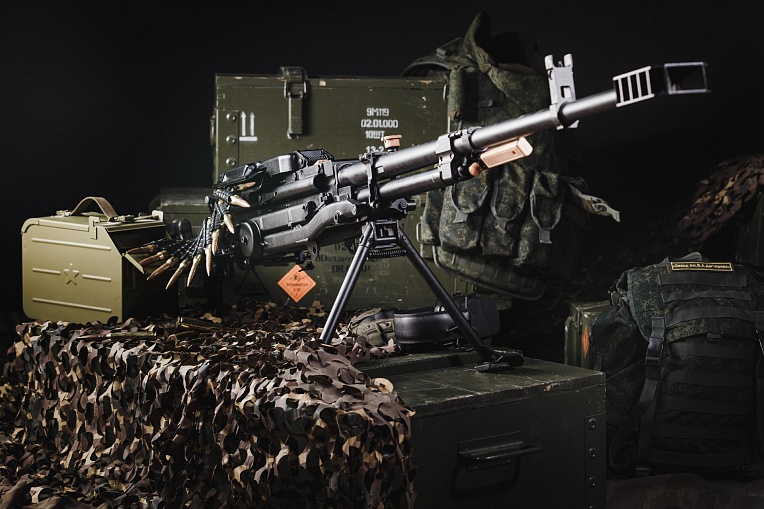 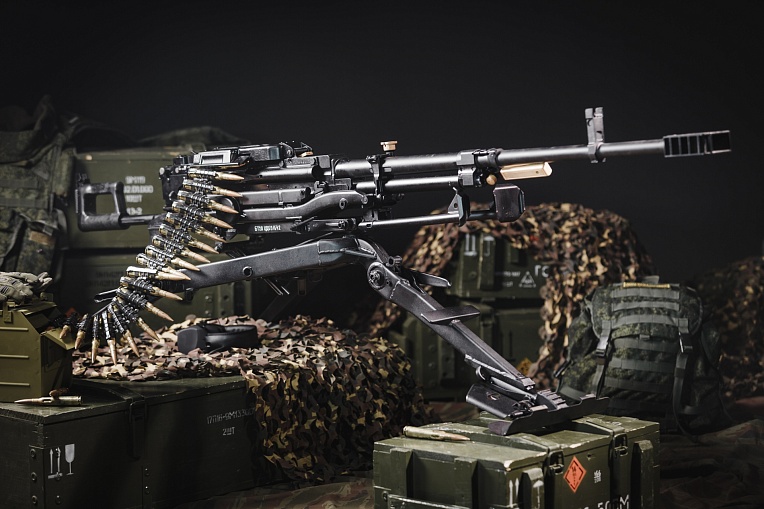 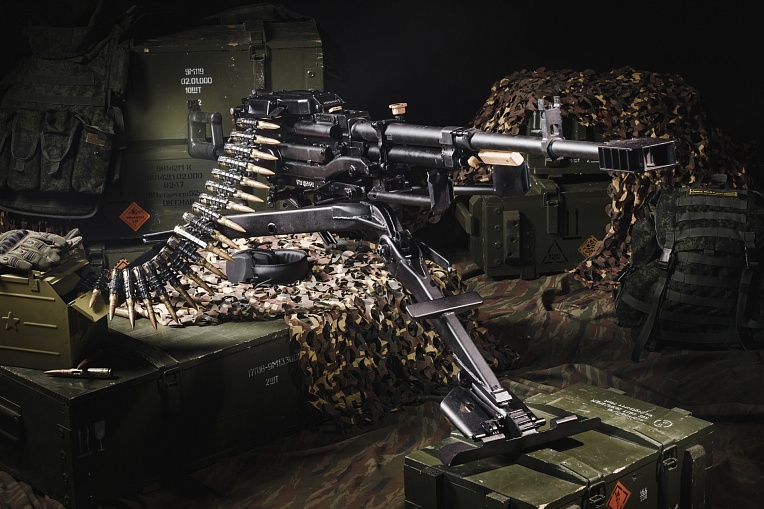 Design of 6P57 machine-gun allows to conduct aiming firing from unprepared position. Compactness of the machine-gun and possibility to transfer it from "travelling" position to the combat one allow to use it during landing of units of landing forces, stream crosing and to fulfil easily combat missions in the mountainous country.

Three important design problems have been resolved in the course of creating the machine gun:

- the automation mechanisms reduce influence of the barrel which allows to prevent resonance oscillation of the barrel and enhance its accuracy;

- recoil energy has been reduced and the machine-gun stability has been increased which made it possible to develop a bipod mounted machine-gun for infantry;

- the barrel life has been considerably increased and provision has been made for fitting automatic large calibre small arms with one barrel.

The KORD tank mounted machine gun with an electric release is a basic variant. It can be installed on various moving and stationary objects for fighting low flying aerial threats, for destroying lightly armoured and unarmoured materiel, weapons, and concentrated enemy personnel at ranges up to 2,000 m.

The machine gun design ensures high grouping and accuracy of fire in a wide sector of traverse and elevation. It has an open type of iron sight and a device for fitting an optic and night sight.

The propitious engineering and design decisions along with manufacturability gave the KORD machine gun effective combat performance and ease of maintenance. It differs from its counterpart in:

- high reliability of operation at environment temperature of ±500 C, in dusty conditions, after immersion in water, without cleaning and lubricating for a number of days, in case of icing and in other adverse operating conditions;

- the trouble-free operation and the capability to conduct intense fire without additional cooling of the barrel and with retention of aiming accuracy;

- consistent grouping, accuracy and rate of fire throughout the entire service life of the weapon;

- ease of maintenance and the capability to rectify faults by the crew   in course of combat employment with the aid of individual SPTA;

- high reparability of the machine gun at troops’ facilities.

The KORD machine gun’s attractive feature to the troops is the similarity of its weight, size and connection parameters with those of the “Utyos” (NSV-12.7 mm) machine gun. This allows replacing the latter without adjustment in all machine gun complexes. It’s worth noting that in terms of main characteristics the KORD exceeds by far its predecessor.

KORD provides for effective firing from any position of the fire on a prepared or unprepared firing emplacement, from   buildings, moving or standing vehicles. The relatively small weight and the capability to rapidly convert the weapon   from travelling to combat configuration enable the crew to change quickly their firing positions for enhanced   survivability, unexpectedness and effectiveness of fire.

About 22 countries manufacture now 12.7x 99 mm NATO cartridges. On this basis, the KORD machine-gun has been developed in all above described variants using those cartridges. The performance and maintenance specifications of the gun are the same despite changes in the design decisions of the barrel and the feeding mechanism.

For aimed firing, KORD can be installed complete with a machine gun mount and support on all automotive or armoured vehicles, on helicopters, sea vessels, and railroad cars. If necessary, it can be easily removed from the installation for use in troop’s formations to support them with fire in all types of operations. When placed on combat vehicles, the machine gun design allows securing the ammunition box on its hinges, to fasten the machine gun in the “combat configuration”, to collect or deflect spent cases, to collect the belt links, to bring the machine gun into the carrier through its hatch or door for placing on a mount.